Spring has finally arrived in Eagle River, Alaska. I spent the better part of two hours working in the Iris garden. I almost changed the name to "Fireweed alley" with all the plants that sprung up over the winter. 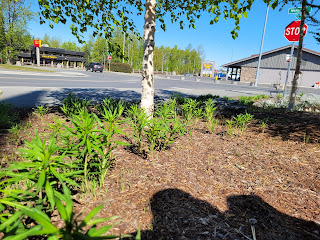 Last year's flowers are long past spent and were removed to make way for a new batch. We will be planting newer flowers in June, after the threat of frost. 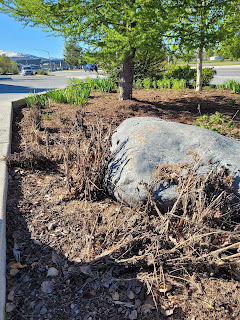 A worm made an appearance after I pulled some of the fireweed plants.
This is good news for our garden bed. 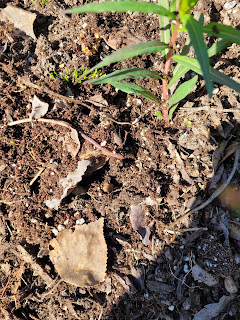 After much toiling, I ended the day by placing one of our garden club signs. I also noted one of the birch trees is ailing. It may need to be removed if it doesn't perk up. 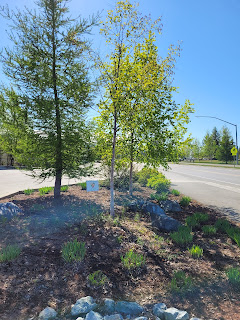 Posted by Educationphile at 10:16 AM No comments:

We have started our seasonal cleanup. Some of the irises were chopped down to the ground and the weeds removed. My partner had garden shears but I used scissors. We walked away with 7 yellow bags full of rubbish. 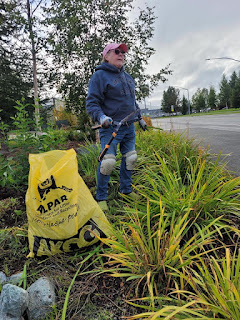 The flowers are still going strong. We will trim these irises in a few days. 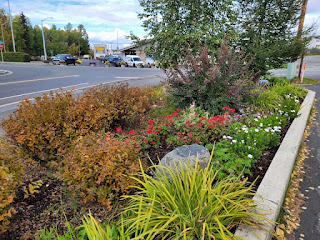 The rock area is looking good after removing the "eggs and butter" plants and the vetch. you can see the trimmed iris plants. More to follow. 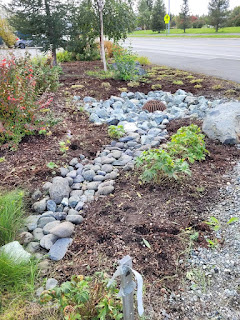 Posted by Educationphile at 2:24 PM No comments:

This past week the team spent some time in the Iris Garden (FG #1) removing weeds and deadheading the irises. There were hundreds of pods to remove. It took about two hours to remove the flower pods. If the pods were not removed all the seeds would have been released into the ground. Normally, allowing seeds to self-sow is a good thing but in the case of this garden not so. Self-sowing would create a big problem with overcrowding in this very special bed.

As you can see, there are already lots of little volunteer irises coming up. The volunteers will be removed over the next few weeks to prevent said overcrowding. Aren't the Fireweed flowers lovely? 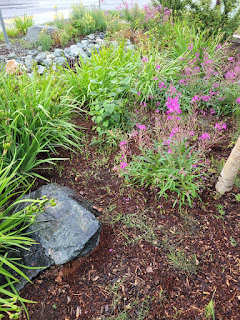 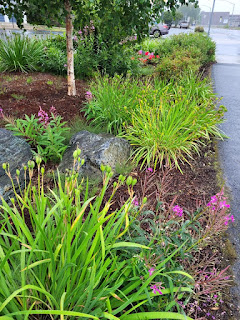 Three bag as a result of removing those pods. The daises and geraniums are still looking great. 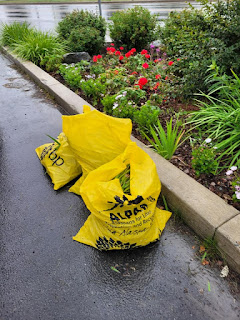 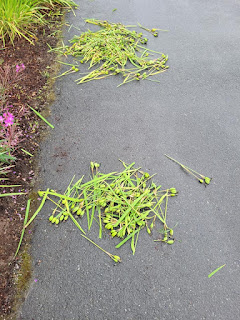 Posted by Educationphile at 10:12 AM No comments:

The iris garden (FG#1) was in full bloom this year. So lovely. Lots of water was provided by mother nature and the Baptist church. A huge thank you to the church team for helping get these beauties a drink. This year has been a cool and wet year. The day I took these pictures was one of the rare sunny days we were blessed with. 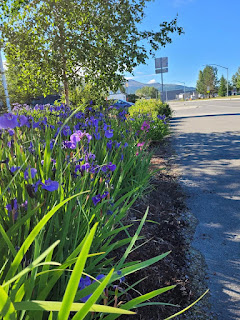 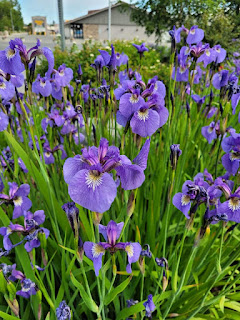 Even the ladybug larva visited 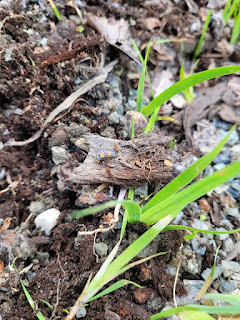 Posted by Educationphile at 10:08 AM No comments:

Whew, we made it through the "Year of Lemons".

It took me longer to get out to Garden 1/Iris Garden. I checked on it in late May, before we planted the welcome sign flowers. All that work last year really paid off. The grass and weed I pulled only constituted half a bag of rubbish. New plants that were not present last year had popped up (mostly what looked like false strawberry plants) near the rock-drain area. The MUNI gave us excess plants so we got permission to use them in this area. Daisy, Begonia, and Chamomile were added to the beds. The pictures were taken in mid-June; some of the irises are blooming. 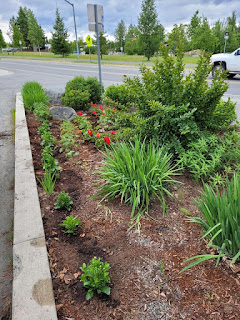 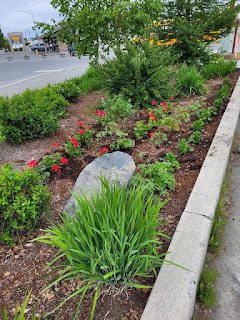 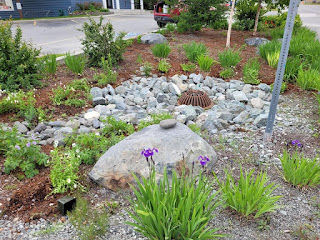 Posted by Educationphile at 12:52 PM No comments:

Not quite the heart of winter

The snow arrived and blanketed the state with its white crystals. Mother Earth has "changed her gown".  The garden seems serene, delicate, and forbidding in many ways. The Birch and Larch trees lend a delicate, haunting to the scene; whereas the mound of snow seems forbidding as it swallows up the plants near it.

In the distance, the clock tower stands over the forlorn garden near the welcome sign. 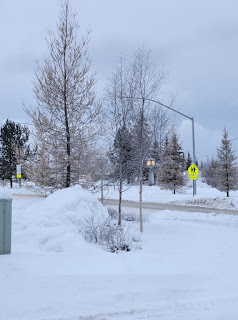 Posted by Educationphile at 3:17 PM No comments:

This past Friday I did some more winter prep in the garden. I cut down the dogwood bushes and weeded much of the rock drain. There is not a lot to do at this time. The leaves on the trees have not changed color yet. The trees may change in a couple of weeks. The daisies are still going strong in the flower department. Anyone can prepare their yard or garden for winter. UAF CES has publications for garden winter prep http://cespubs.uaf.edu/publications/?&s=*&pt=*&cat=7 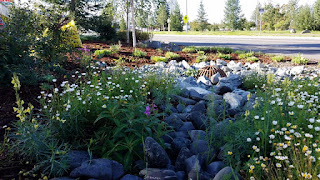 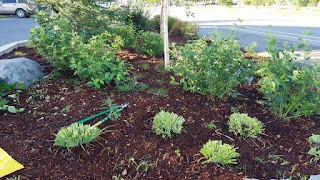 Posted by Educationphile at 12:01 PM No comments:

Educationphile
Welcome. I am a retired educator who loves to dabble in the garden. I also like to go bird watching. Enjoy the blog